Tourmaline is a family of gems that can be found in every corner of the world. The richness and vastness of colors you can enjoy from Tourmaline is endless! A common mineral known as Elbaite is responsible for the incredible colors you see when you enjoy beautiful tourmaline gems! “Elbaite is the most well-known and valuable form of Tourmaline. Most of the multicolored Tourmalines and almost all of the Tourmaline gemstones are of the Elbaite variety. Elbaite is perhaps the most multicolored mineral, coming in virtually every color of the spectrum. Multicolored crystals of Elbaite are well known and unsurpassed in beauty.” (www.minerals.net) 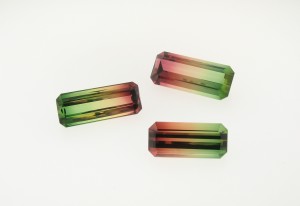 The Tourmaline Triplet story is unique in the fact all three hail from the same large crystal, found in an alluvial dig in 2008. The crystal was brought out of a riverbed after surviving tumbling down a mountain side and being preserved for hundreds of years in this river. Collectively they weigh more than 225 carats, with the largest gemstone weighing in at over 95 carats!! We can only imagine the miners joy when this large crystal was discovered!

While it’s common and accepted by industry professionals for Tourmaline to show internal characteristics, these three beauties are not only super sized but exceptionally clean of internal ‘flaws’. Each of them display full three color spectrum and when laid out next to one another, the color bands line up perfectly. Rare and exciting, without a doubt!

The Tourmaline Triplets came to Somewhere In The Rainbow owners one at a time…from two sources in different parts of the world, they were discovered and the three gems reunited after being hewn by cutters from different regions.

The unfolding of this story is one we hope to share in detail in a book someday as it’s a very special tale of nature, elemental forces and passion of people who take such care in bringing these types of gems to life…from the miners to the cutters, to the brokers who source them and jewelry industry leaders who wish to preserve them for generations to learn from and enjoy!

Somewhere In The Rainbow is honored to have had a hand in procuring these phenomenal Tourmaline Triplets and donating them to the people of the United States through the Smithsonian Institute of Natural History in 2009.

Our hope is when you travel to The Smithsonian Natural History Museum to see the rare and vast collection of gems, minerals and jewelry people have generously donated, you will have greater appreciation of the magic of the gem world and how much care goes into the preservation of these rare resources of Mother Earth!

Thanks to minerals.net for the Elbaite quote referenced above

Items donated to the Smithsonian Institute