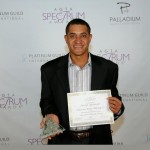 Darryl Alexander’s passion for design started at a young age and thankfully for the rest of us who enjoy the unique, the special and the magic that can only be created by a master gem cutter, Darryl took advantage of his teachings, took them to new levels and has never been afraid to create outside of the box!

Darryl began his design career with clothing but soon discovered gems and jewelry were really meant for him and 30 years later, Darryl is a multiple award winning gem cutter, carver, miner and jewelry artist. Darryl’s resume is an impressive one which includes crafting jewelry for the famed, Borsheim’s store in Omaha, Nebraska where he learned many new techniques and found a love of cutting rough into fabulous gems to be treasured in jewelry pieces for clients around the world. Darryl’s work has been featured in publications such as Modern Jeweler, Professional Jeweler, Lapidary Journal, and Vogue.

Darryl resides in Arizona and has been married to wife, Linda for 26 years with seven beautiful children. He credits his success to his mom and dad who he says always encouraged him to be what he dreamed to be and to his wife, who has stood beside him through all of life’s joys and challenges. You can see more of Darryl’s work on Facebook at Darryl Alexander, Alexander’s Jewelers.

Somewhere In The Rainbow is proud to feature Darryl as one of our premier artist’s and gem cutters. Thanks Darryl for your passions being shared!!